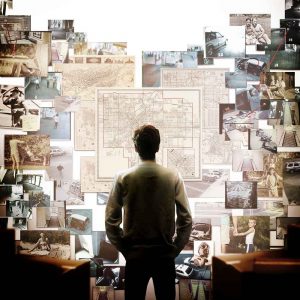 The play “Stalking the Bogeyman” by Markus Potter, David Holthouse and others provides the other side of that coin. It is a play that explores the circumstances and consequences of abuse on a child, both during their childhood and in later life. It reflects the real life story of David Holthouse – brilliantly portrayed by Gerard McCarthy.

David is a survivor of non-domestic abuse. But the audience is constantly reminded of the challenges he had to manage with his parents as well as his abuser. In some respects the story is less Stalking the Bogeyman than the Bogeyman stalking the victim: in terms of geography but also what is within David’s head. The Bogeyman is played with intensity by Mike Evans.

The flashback to the abuse sees the adult David performing as the seven year old and the understanding of the ‘inner child’ of abuse survivors made the performance more hard hitting and a complex performance.

David’s parents had moved a long way from their home and were keen to establish new friendships in the area. That led to encouraging David to befriend The Bogeyman. There is an undercurrent of narcissism in Nancy Holthouse, David’s mother (played by Glynis Barber). It is never quite resolved whether Nancy’s actions were driven by a desire to love David or a need to self-validate and feel better in herself.

Perhaps the most powerful scene is when David is finally able to tell his parents what has happened to him. Nancy asks “why didn’t you tell us?” Most likely the voice of every survivor in the room was screaming silently “why didn’t you know?”

This play is emotive, emotional and thought provoking. So spellbinding that it wasn’t until the cast took a bow at the end you are suddenly reminded you are watching a performance and not living in another man’s nightmare. Despite everything David survived an ordeal that many do not.

It runs at the Southwark Playhouse London SE1 until 6 August 2016. An intimate but not intimidating venue that invites the audience to feel part of the production as the performance uses all of ‘The Little’ and the actors perform not only in front of the audience but between and behind.

Was the Bogeyman repentant, was it the only time, was his marriage a convenient way to approach his wife’s child or is he other survivors bogeyman?

In many ways this is a play for survivors, in the sense that so many aspects are likely to chime with their own experiences and emotions. But more importantly, it is a play that should be watched by people who are not survivors so that awareness and education can be raised.

If it were to tour the UK “Stalking the Bogeyman” would reach a greater audience.

Voicing CSA thoroughly recommends it as a ‘must see’.

There are currently no meetings scheduled.