Lucy Fallon the actress who plays Bethany Platt in Coronation Street has kindly accepted the position of Patron with Voicing CSA. Lucy has been working with Christopher Harper, already a Patron of Voicing CSA and playing the role of Nathan Curtis who has been exploiting the character Bethany for a paedophile ring.

Lucy Fallon will be at the Voicing CSA meeting in Wrexham on 27th May 2017 and will talk about her character in Coronation Street and discuss the effects playing Bethany has had on her as an actress and about exciting future plans that will support Voicing CSA.

Lucy said today ‘I have given this a great deal of thought and would be honoured to be a patron of Voicing CSA. Thank you so much for asking me’. 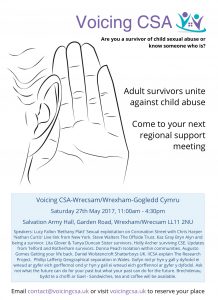 Phillip Lafferty, Chair of Voicing CSA responded ‘We are very pleased to have Lucy accept a position as Patron for our organisation, there is going to be much exposure in the future about children and young adults being abused and exploited and it is the representation of this being done responsibly by television, the media and films that will help in the fight against such evilness’.

Thank you Lucy Fallon. Welcome on board, the Directors, Chair, Ambassadors and supporters of Voicing CSA are pleased to work alongside you.